Yesterday's solution is a clock

If you are at home today, complete the Online Pupil Survey. Details were sent out last week to your parent's email address. Thanks!

If you are at home today, sign up to the Summer Reading Challenge.  Click on the picture for details.

This is "Year 6 - Week 9 - Lesson 4 - Volume of cuboids" by White Rose Maths on Vimeo, the home for high quality videos and the people who love them.

Today you will need pages 2 and 9 of the booklet. 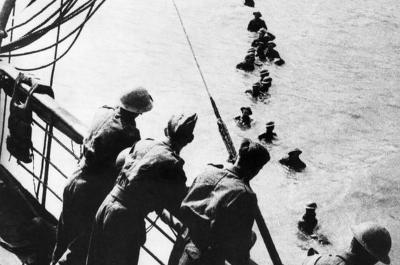 What does it mean to be really generous and self-sacrificial?

This is a true story of the desperate Dunkirk evacuation of 1940, when Britain and its allies were losing World War II.

William was terrified. All around him, soldiers lay huddled on the sand. Many like him had gone without food for days as they retreated towards the French coast, chased by enemy tanks. Overhead, bombers were swooping down like great ugly birds of prey, shooting their bullets and bombs at anything that moved. The British and French armies had been beaten, and now their soldiers were trapped on the beach at Dunkirk, waiting to be rescued. William was only 16. Was he going to die?

There were thousands trapped there, all desperate to escape, with the British yearning to get home across the English Channel before the enemy soldiers came. But the big ships couldn’t get close enough to the beach to collect them. Instead, lots of smaller boats had been brought over to ferry the soldiers from the beach to the ships. So the soldiers had to queue up in long lines stretching down into the water, towards the places where they could be picked up. William stood in line, waiting.

Another bomber flew overhead firing, and everyone dived for cover. When it had gone, they all took their place in the queue again, like commuters waiting for a bus. Soon, Will was standing ankle-deep in the water. As the line went forward, the waters rose. Cold waves were lapping round his waist. More boats came, and the line went further forward. After what felt like ages, he was near the front. Would he make it?

There was a great big soldier standing in front of him, a Guardsman. Another boat came. 'We can take eight men,' shouted a sailor. One by one, the soldiers in front were pulled out of the water into the small boat. William was nearly there! Would they take him? The big soldier in front was just climbing in.

'That’s all!' shouted the sailor at William. 'Anymore and we’ll sink! You’ll have to wait!'

Wait? William couldn’t stand it. 'No!' He felt small and lost… and started to cry.

Suddenly, he heard a big splash in the water. Then he was being lifted from behind by two big strong arms, up out of the water, and into the boat. It was the big soldier who’d been in front, the Guardsman. He was now back in the water. He had given up his place.
‘You go first, son’ he said, gently, patting him on the shoulder. The boat turned away, leaving the Guardsman and the queue behind. William never saw him again.

Many years later, William told his story on BBC radio. He still didn’t know what happened to the Guardsman who gave up his place for him on the beach. Jesus said that the greatest love of all is when someone lays down their life for others. Christians believe Jesus did that for everybody at Easter, laying down his own life so that others could live, just as the Guardsman put William’s life ahead of his own.

I wonder why the Guardsman did that?

How could we could put someone else first instead of ourselves, today?

Father God, thank you for all those people who have willingly risked or given up their own lives to save others. Help us to be strong, too, when others need our help. Amen

Look through the PowerPoint above before considering these questions to reflect on.
Top
Cookie information
Cookie Notice