Ask someone to test you on your spellings!

Go to page 16 of your document - send me your finished stories. I'd love to read them.

Choose a level from 1 - 3 and read a Fact File about VE Day.

This activity is a fun way of learning about how explorers survive the extreme conditions in the Arctic. You will investigate different materials and compare how they perform as insulators. You should complete the experiment in real-time along with the presenter. While waiting to measure and record the results, you will be encouraged to think about how Arctic animals have evolved to keep warm.

*If you have any questions you would like to ask the presenter, email me before midday and I can submit your questions in advance to the presenter. proctorj@christchurch-chelt.gloucs.sch.uk    Hopefully we will get a "shout out" this time!

• Describe the climate in the Arctic

• Apply prior knowledge to making predictions

1. Introduction (5 mins) The presenter open the session with a welcome and brief introduction to the expedition and any shout-outs to registered classes. The presenter will then proceed to speak about the climate in the Arctic and staying warm. In this activity students will investigate clothing materials and consider how other organisms survive without clothing in the extreme Arctic environment. 2. Subject knowledge (5 mins) The presenter will introduce some of the organism that live in the extreme Arctic environment and how they have adapted to be able to survive in this extreme cold weather. During this time students to get into their allocated groups and set up their experiments.

3. Activity (20 mins) The presenter will go through the three materials he has chosen to compare and will proceed to set-up his experiment. 4. Q&A (15 mins) After completing the activity, the presenter will be able to answer presubmitted questions and take part in the live chat.

Use today to prepare for the VE Day celebrations tomorrow - what will your family do?

People are encouraged to undertake the ‘Nation’s Toast to the Heroes of WW2’ at 3pm on the 8th May, from the safety of their own home by standing up and raise a glass of refreshment of their choice and undertake the following ‘Toast’ – “To those who gave so much, we thank you,” using this unique opportunity to pay tribute to the many millions at home and abroad that gave so much to ensure we all enjoy and share the freedom we have today.

Announcing its coverage plans to mark 75th anniversary of VE Day, the BBC said in a statement: “At the heart of the commemorations will be a special address from HM The Queen broadcast at 9.00pm – the exact time her father spoke to the nation three quarters of a century ago.”

Have a look below for some activities you can do with your families. 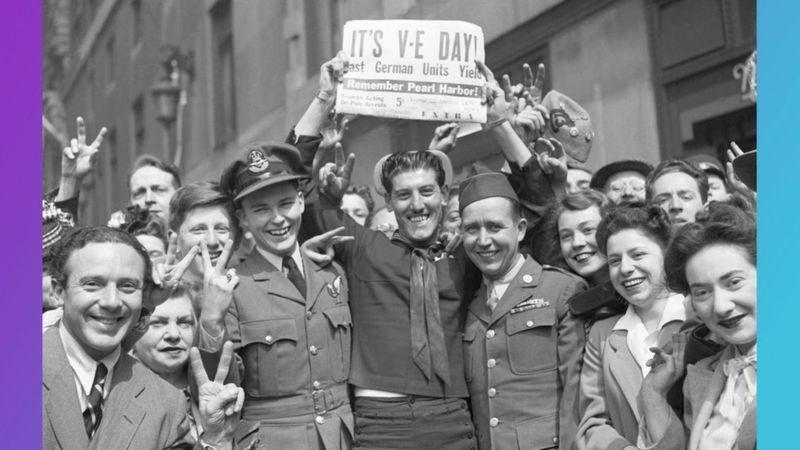 VE Day - or 'Victory in Europe Day' - marks the day towards the end of World War Two (WW2) when fighting against Nazi Germany in Europe came to an end. On 8 May 1945, Prime Minister Winston Churchill made an announcement on the radio at 3pm that the war in Europe had come to an end, following Germany's surrender the day before.

How was VE Day celebrated?

By the beginning of 1945, the German army had been weakened and defeat looked likely.

Tuesday 8 May, 1945, was an emotional day that millions of people had been waiting for.

Many people were extremely happy that the fighting had stopped and there were big celebrations and street parties.

Huge crowds - with lots of people dressed in red, white and blue - gathered outside Buckingham Palace in London. They cheered as King George VI and his family, including Princess Elizabeth (the current queen) and Princess Margaret, came out onto the balcony to greet everybody. Princess Elizabeth and her sister were allowed to leave the palace and celebrate with crowds outside, although they had to do it secretly. The future Queen described it as "one of the most memorable nights of my life".

Many people also attended church services to thank God for the victory.

London's St Paul's Cathedral held 10 services, which were attended by thousands of people.

But VE Day was also a moment of great sadness and reflection, as millions of people had lost their lives or loved ones in the conflict.

Many had to continue fighting in other battles and lots of people were being kept as prisoners of war abroad.

Was VE Day the end of World War Two?

Even though VE Day marked victory for Europe over Germany, it did not mark the end of World War Two.

In his VE Day announcement, Winston Churchill said: "We may allow ourselves a brief period of rejoicing, but let us not forget for a moment the toil and efforts that lie ahead."

Even after 8 May, many soldiers, sailors and pilots were sent to the east to fight against the Japanese, who had not yet surrendered.